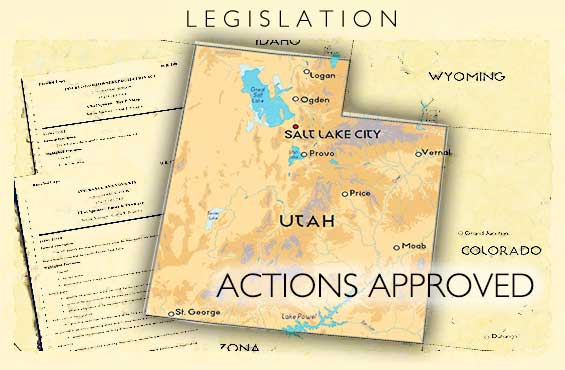 * Neither the coronavirus nor a 5.7-magnitude earthquake stopped Utah legislators from sending 3 anti-fraud bills to Gov. Gary Herbert for his expected signing. Contractor AOBs are front and center. Among the provisions, the first bill prohibits contractors from offering rebates of deductibles. Written contracts also are required. They must disclose all costs and fees, plus a detailed description of the scope of work. … Another bill grants the insurance commissioner the power to deny an insurance license to applicants convicted of a felony involving dishonesty or breach of trust. … The final bill seeks to curtail excessive medical billing on land and in the air. It would require healthcare facilities to disclose out-of-network pricing upfront to consumers, and the insurance commissioner. Medical providers who use balanced billing also must submit a report detailing their billing practices to the commissioner. The provisions also apply to air ambulance operators, who often claim they’re immune from state oversight.

* After months of concern, a bill to consolidate all of Indiana’s fraud laws into a single code provision has died for lack of support in the House after passing the Senate. The well-intentioned bill would’ve weakened insurance-fraud prosecutions, argued the Coalition, NICB and other stakeholders. We worked to ensure prosecutors retained easy access to Indiana’s insurance-fraud statute. The statehouse has adjourned for 2020, though the bill may resurface in the future.

* A bill seeks to empower the Virginia insurance commissioner to levy fines of up to $1,000 per violation on medical facilities that engage in improper billing — including balanced billing. It’s ready for the governor’s signature. The bill would protect consumers from exorbitant surprise medical bills, or “balanced bills,” from out-of-network medical providers. It also would create a dispute resolution system for consumers and insurers if they believe a medical provider is overcharging for out-of-network medical services. The governor is expected to sign the measure in the coming weeks.

Note: Texts of anti-fraud bills are available on the Coalition’s website here. 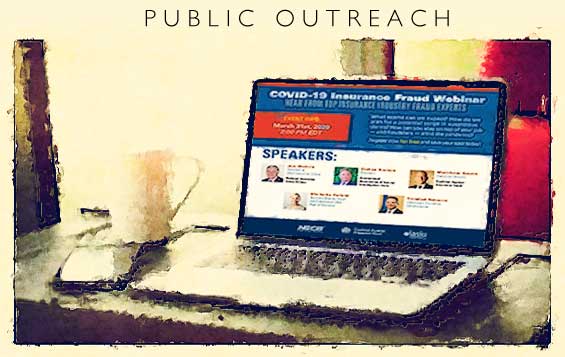 * “Forward-thinking fraud fighters already are ramping up planning for a similar scam surge. If we face a lengthy new norm of business shutdowns, dwindling personal savings and free-falling economy, then many decent Americans may cheat their insurer for a fast cash infusion,” the Coalition’s Matthew Smith writes in a Property-Casualty 360 article posted today. “False claims may seem a justifiable lifeline against bankruptcy, losing their home or business, and throwing their family or employees onto the streets. Insurers equally owe a high duty to policyholders in these increasingly financially difficult times. Insurers need adequate staffing to handle and investigate claims, reach correct coverage decisions. Importantly, they must balance their own need for financial returns in a fair and equitable manner.” 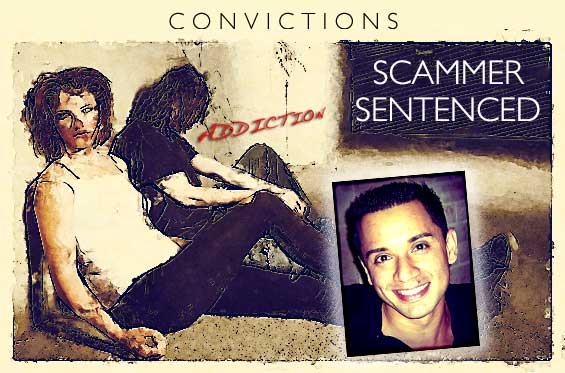 * A sober-home scammer sought a mistrial or recess after 6 weeks of testimony in Miami, citing the pandemic. The jurors agreed to stick it out, and the judge agreed. It was worth the wait. Sebastian Ahmed was convicted of the $38-million plot. He lured hundreds of young addicts to live in his “Serenity” sober homes and clinics. Yet Ahmed gave the addicts little or no drug treatment. Three patients testified they attended no group-therapy sessions, nor did most others. A mother testified that her daughter had no drug problem yet flew to Miami when Ahmed paid her plane ticket and rent. She got hooked on heroin and Ahmed billed her insurer $115,000. Ahmed threw his staff under the bus, saying he didn’t know about all the wrongdoing. Ahmed’s brother Ali helped run the con. He also impregnated a heroin patient, and plied her with the drug. The baby tested positive for heroin and other drugs after birth. The Ahmed brothers both were handed 10 years in federal prison. 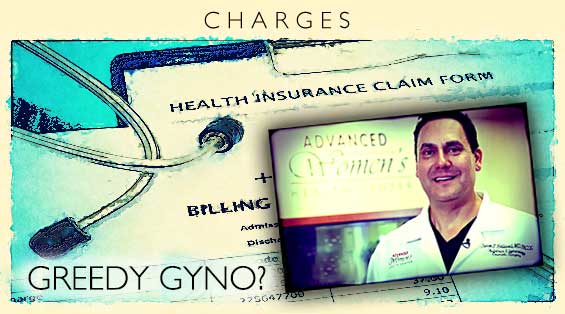 * Will Dr. Jason Helliwell and 2 cronies stand stand trial in California? We’ll know in July. That’s the new prelim hearing date amid the corona pandemic slowdown. The charges: The Bakersfield gynecologist allegedly ordered a slew of unneeded allergy tests for patients who didn’t complain of symptoms. He also set up a toxicology lab to steer patients for the tests. They included a complete drug panel for illegal drugs billed to insurers at $1,000 per test. The patients didn’t know about the bogus tests. A lab rep received up to $25 per patient sent for tests, and another crony provided and paid for a lab assistant. 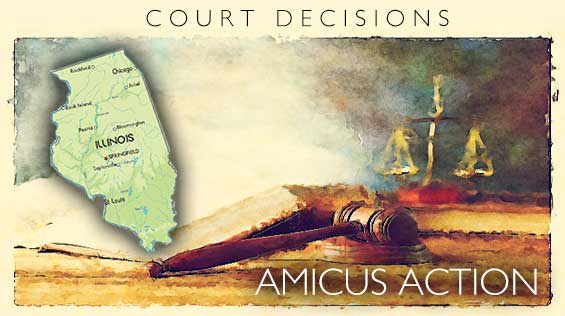 * The Illinois Supreme Court has accepted the amicus curiae brief filed on behalf of the Coaliton by the Katten law firm’s Chicago office. The public interest in protecting Illinois residents from insurance fraud is strong enough to invoke the state’s anti-fraud whistleblower law, whether or not the state itself has incurred a monetary loss, the Coalition contends. We urge the Illinois high court to adopt the appellate court’s holding. A decision on this important case is expected later this year or in early 2021.

* Add a new page to the insurer bad-faith and anti-fraud playbook: A state circuit court endorsed a way for an insurer to avoid a bad-faith claim involving possible fraud in the policy application. The case arose from a lawsuit against an addiction inpatient treatment center in Colorado. A patient alleged racketeering, negligence and liability claims against a doc and the center. The insurer denied coverage. Still, it agreed to defend and ultimately paid the settlement — then sued for fraud involving the policy application. It alleged the center misrepresented that it didn’t do inpatient treatment. The 10th Circuit found for the insurer. It would’ve been financially unreasonable for the insurer to refuse to pay the settlement, because that would’ve exposed the insurer to a risk of a bad-faith lawsuit. Public policy also held sway. Allowing the insured to retain the benefit of coverage, even when fraudulently obtained, would foster more insurance fraud. [Evanston Insurance Company v. Aminokit Labs, Inc., No. 19-1065, 2020 U.S. App. LEXIS 8571 (10th Cir. Mar. 18, 2020] 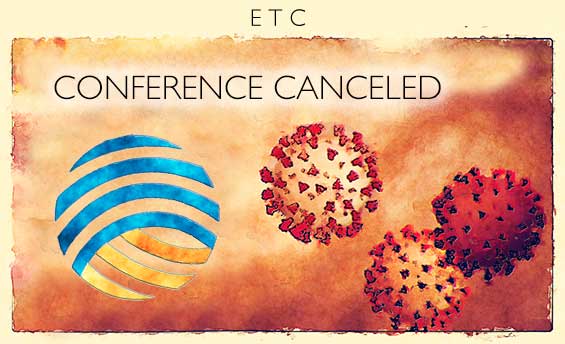 * The rapid surge of COVID-19 requires that the Coalition act responsibly to cancel our Midyear Member Meeting, originally scheduled for June 8-9 in Orlando. We’re exploring alternatives to deliver members your midyear updates. We’ll share info soon, and appreciate your patience. … Also, please mark Dec. 14-15 for our Annual Member Meeting. It again will be held at the Doubletree Hotel in Crystal City, Va. You’ll receive more information later this summer. If you have questions about our midyear meeting, please email us at info@insurancefraud.org.

* “… if we learned anything from the calamity of 2007-2009, the frequency and severity of fraud are about to increase — and possibly in a big way. …” the Coalition’s Dennis Jay writes in a prescient JIFA article. “As the economy collapsed, the private and public sectors both cut back on their workforce. Insurers even reduced the numbers of investigators — the exact opposite of what they should have done. As consumers felt the economic pressures of losing jobs, more and more otherwise honest people became desperate and saw their insurance policies as an easy avenue to help ease the financial pain. And it wasn’t just individual consumers. Businesses both small and large quickly grew adept at scamming insurance.”

* We need to double down on financial fraud like coronavirus cons, a former federal prosecutor urges. “… crude online and telephone scams are marked by features that drive prosecutors away. They are tedious and can take years to investigate. Much of the evidence—like bank records—may be overseas, and obtaining it is a bureaucratic slog that may never end. …” Ankush Khardori contends. “We are not doing nearly enough to combat these scams, and the coronavirus fraudsters will bring that into stark relief. The Department of Justice urgently needs to prioritize its resources toward aggressively pursuing these schemes across the globe, and it needs to be backed by a large investment of financial and human capital and with the coordination of international law enforcement partners. The work will be long and difficult, but the government is way behind, and the most vulnerable members of our society are paying the price.”

* Docs are illicitly writing scripts to hoard drugs that might be combined to treat COVID-19. The drugs are hydroxychloroquine and a commonly used prescription antibiotic. Demand has soared, and docs are writing scripts to themselves, family and friends to build up supplies, says ProPublica. An Illinois prescriber tried to get the med without an explanation, then claimed the patient had arthritis when the pharmacist questioned the script. There’s little evidence the drugs can treat coronavirus, though clinical trials are underway to find out. The Illinois Pharmacists Association is urging docs, nurses and physician assistants not to write illicit scripts for themselves, friends or family. 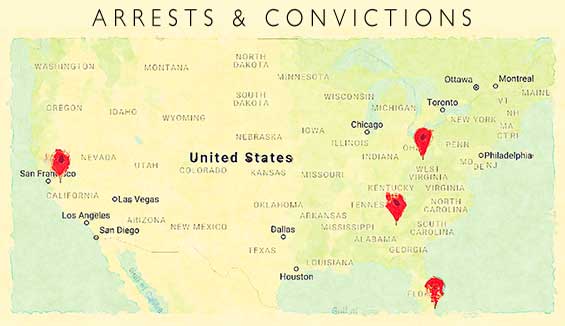 Suspect charged with $38M sober home con in Florida. … Gyno allegedly orders unneeded tests in California. … Insurers have new page in their bad-faith playbook thanks to court decision in Colorado. Click the pins to read about these and other fraud cases around the U.S.

Fraud News Weekly is published each Friday except for Thanksgiving week and the week between Christmas and New Years. Copies of previous issues are available in the members-only section of InsuranceFraud.org. Employees of member organizations may share this newsletter freely internally. Sharing by non-members strictly prohibited.